THE ABDUCTION OF THE GERMAN GENERAL KREIPE – WWII on Crete

In this cave kept hidden kidnapped German General Kraipe for two nights. A great historical event in inspiring and makes you feel proud. It is a symbol of patriotism, conscience and bravery. A milestone in the history of our village. A place of awakening historical consciousness and reminder of duty.

The British captain, BILL STANLEY MOSS, in his book “ILL MET BY MOONLIGHT“, writes: “We are now hiding in a delightful spot which is about a mile from Patsos. We sleep in a stone – walled hut which has been built against the base of a steep cliff, so with trees on three sides and the cliff behind us we could not have found a more sheltered position.

The dinner was excellent. We are being cared for by a charming family which, though very poor, gives us everything it has. The father (Efthimios G. Harokopos) is a fine, old – fashioned Cretan type, and he tell us that since the German occupation he has looked after more than sixty British and Colonial stragglers who were hiding from the enemy. His young daughter is a sweet – looking girl whose face has the appearance of a delicate waxen mask – a look of L’inconnue de la Seine – and altogether she is possessed of a natural grace and charm which is all too rare among the island’s women folk. She goes bare – armed, bare – legged, and wears a one piece canvas dress, and her hair is arranged in two long plaits. It is quite possible, I suppose, that she is only about twelve years old, and perhaps it would be best not to think of her as she will be in ten years’ time. Her brother, Iorgi by name, is a handsome young man with a quiet manner and Biblical face. He speaks a little English, and has told me that he would like to go with us to Cairo. We may take him along if there’s room on board. 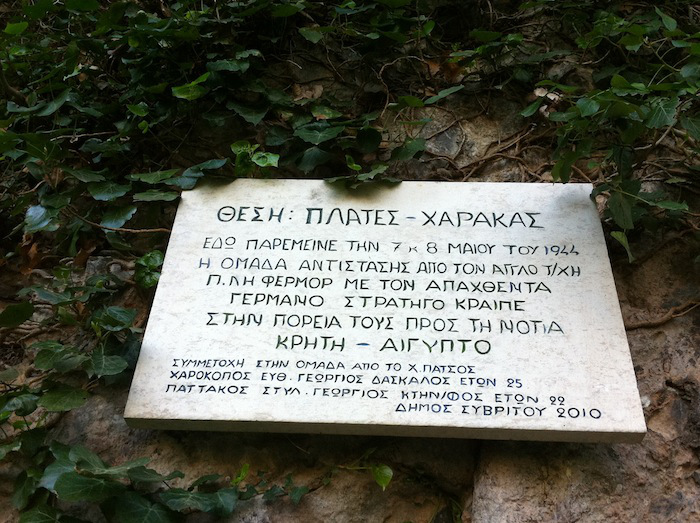 We have been so well looked after at this hideout that this afternoon we decided to give the family a present of gold (for we knew that its wealth consisted of little more than some goats and a few olive – trees); so Paddy (Patrick Leigh Fermor) called the old father aside. He reminded him that we were in all probability going to take his only son, Iorgi, with us to Egypt, and therefore there would be no one left to help with the work at home. So, Paddy continued, would he accept the hopelessly inadequate gift of a few sovereigns in exchange of his son?

But the old man – as well we might have guessed – merely shook his head, thanked us for our kind thought, and politely refused. We did not press him.”